Here’s the report if you miss the original post. I am going to translate members’ comments from the Facebook group “more than ten thousands Hongkonger object to self-drive tour (from China) destroying Hong Kong” (多過十萬港人強烈反對自駕遊下月摧毀香港). 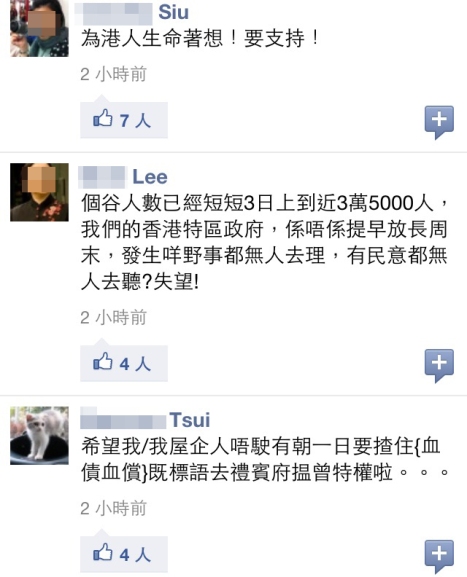 Siu: For the sake of Hongkonger’s life. Need to support!

Lee: Within three days, the number of member is now boosted to around thirty five thousands. Our HKSAR government, are you taking off to your long weekend holiday earlier? Whatever happen, there is no one to deal with it. Nobody listens to public opinion. Disappointing!

Tsui: I wish that me or my family would not need to take out the banner “blood debt blood repay” to Government House to look for Donald Tsang.

Lam: Hong Kong government would not operated if no one died. “Don’t shed tears until you see your own coffin” (*a Cantonese idiom). They just show their ignorant faces. There will blood after self-drive tour (from China). Those government officials have traffic police to protect them. They certainly don’t need to worry. Please! if Hongkonger was ran over by Hong Kong car. It would not become political incident. However, if Hongkonger were ran over by Mainland car that violated traffic rule, it would be a political incident. Do you guys have brain? 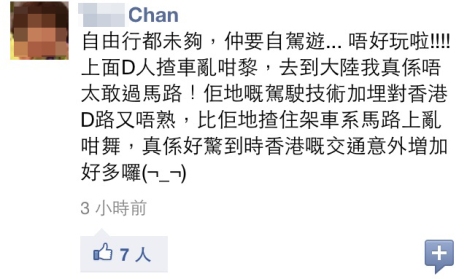 Chan: Individual visit scheme isn’t enough and there will even be self-drive tour… Don’t fool me! Mainlander drivers don’t follow rules. When I was in China, I dared not to cross roads. Their driving skill and unfamiliarity with the roads of Hong Kong, I really afraid that the no. of traffic accidents are going to surge. 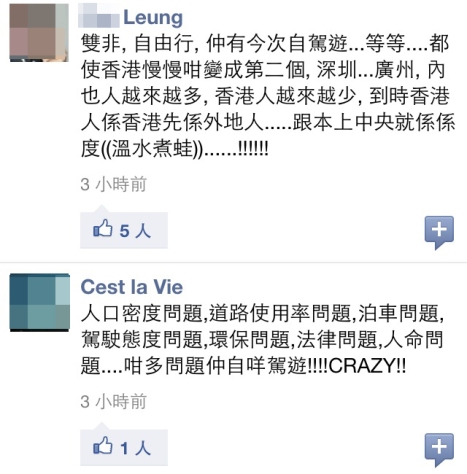 Leung: “Double negative” (both the pregnant and her husband are Mainlanders), individual visit scheme, etc… These slowly transform Hong Kong into a second Shenzhen and Guangzhou, (*where locals become minority). More and more Mainlander, and lesser and lesser Hongkonger, at that time, Hongkonger will be foreigner of Hong Kong. Basically, Beijing is killing us slowly. 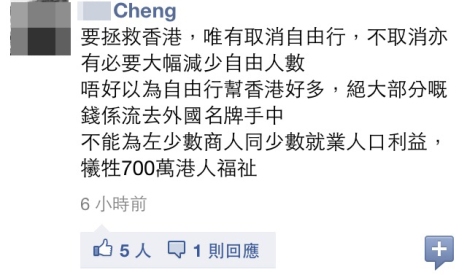 Stop individual visit scheme is the only way to save Hong Kong. Even if the scheme is not stopped, the no. of Mainland tourists have to be reduced. Don’t really think that individual travel scheme helps Hong Kong a lot. Most of the money are in the pockets of foreign luxury brands. We can’t sacrifice the welfare of 7 millions to a few businessmen and a small number of jobs.