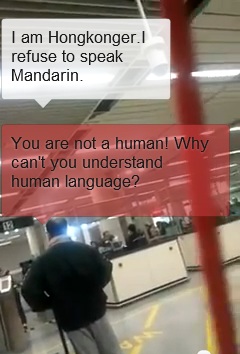 A video titled with “蛻變中的蝗蟲在深圳灣入境大堂對入境長官及所有香港人的羞辱” (a metamorphosing locust insulted immigration officer and all Hongkonger at Shenzhen Bay customs) was uploaded today and it has already became the hottest topic on Youtube and forums. The info of the original uploader says that the woman, who is a new immigrant of Hong Kong, didn’t have permit but she insisted to use the more convenient e-channel to cross the border. In the video, she insulted the immigration officer for not being able to understand Mandarin and implied that Cantonese is not a human language. She also said Hong Kong was nothing special even though she is a new immigrant of there.

ZeroKong0213 : The immigration officer has backbone!

ohs : She is a new immigrant. Is this crazy? She is a Hongkonger but doesn’t use Cantonese.

andy1002: This is the core of (Hong Kong) core value. Spirit of Hong Kong.

lullyluk: If she thinks that Hong Kong has nothing special, then don’t apply to be a Hongkonger. There was no Mandarin education in the past. You can’t tell the officer to speak your language. He does nothing wrong. That’s a crazy Mainland Chinese woman.

kennethchoi58: Chinese have to speak Mandarin only?

jackyyip2002: Those useless government official make front line disciplined services suffer from the temper of Mainlander. Don’t need to give face to this government. It’s right to treat this kind of Mainlander harsher.

HKThomas2011: Speak Cantonese in Hong Kong area. Hongkonger speak Cantonese. Go back to country if don’t understand. Hongkonger is indeed nothing special. However, (we) are better than Mainland locust. They has no humanity, conscience…they don’t qualify to be human.

charles198964: Just don’t give a sh**. Not only Hong Kong is “nothing special”, according to the thinking of many Mainland Chinese, “America is nothing special since China own billions of treasury bond.  Hongkonger still want the backup of Britain. Britain is in decline now. China should just stop providing Hong Kong electricity and water and let Hongkonger find their English daddy. No matter how rich Macao is, it’s still a small island. Taiwan is nothing special. It’s part of China. Japan is just a lapdog of America. The economy of Korea is weak and Korea is divided into half. The north of Korea is not a country at all. Besides, ancient Korea gave money to China for protection. ” The conclusion for (Mainland Chinese) is they are the smartest, greatest, biggest a**hole. If they want, they can own the world.

lau928 : The knowledge that Chinese look down on Hongkonger is a common sense. Everybody knows. Now, it has developed that every Chinese can insult Hong Kong civil servants crazily in public even when they are at fault. Do you want to be “blood is thicker than water” with these “cousins”?

The incident was reported in Hong Kong media and spread to Mainland Chinese Weibo via a Guangzhou Cantonese. 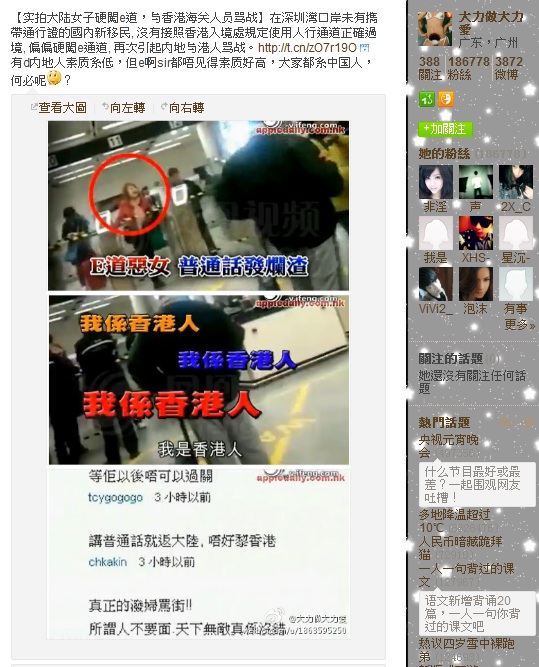 The first three lines are description of the incident and I am going to translate the last line, which is her opinion.

The quality of some Mainlander are low. However, the quality of this immigration officer isn’t high either. We are all Chinese. It doesn’t have to be like that. 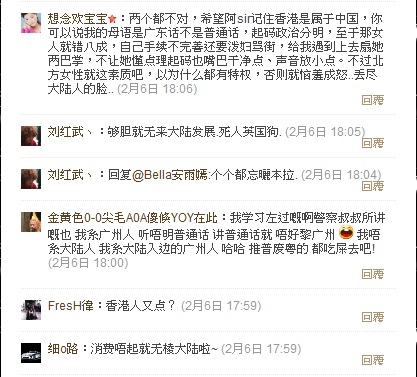 想念欢宝宝(*a Mainland Cantonese)：Both side are wrong. I hope that this immigration officer remember Hong Kong is part of China. You can say that my mother tongue is Cantonese. That’s politically correct. And for that woman, she is 80% wrong. She had gone hysterical even though she didn’t have her application done. If I saw her, I would slap her in the face so that she would not shout with obscenity and speak in lower volume even if she still couldn’t back to rational. However, the quality of Northern women is this low. They think they have privileges. If they don’t get privileges, they will become crazy and make all Chinese losing face.

刘红武丶:Everybody forgets who they are.

金黄色0-0尖毛A0A傻倏YOY在此(*a Mainland Cantonese)：In here, I learned from this police. “I am Cantonese. If you can’t understand and speak Cantonese, don’t go to Guangzhou. I am not Mainlander.” I am a Cantonese inside Mainland China. Haha, those who promote Mandarin and ban Cantonese eat sh*t.

FresH徫: What’s so special about being a Hongkonger?

游Y_Y(*a Mainland Cantonese)：She got her just desserts. Even if you have money, don’t spend it on that rubbish port. Mainlander don’t shop in there. You Hongkong dog can’t even afford to eat sh*t.

CALL_ME_GXQ(*a Mainland Cantonese): That woman brought herself trouble. She indeed is of low quality. However, you (*Hongkonger) don’t generalise us. Are Mainlander all low quality? If you have time to sing (*refer to the incident that a group of Hongkonger teenager singing anti-Mainlander song in front of Mainlander), why don’t you do something meaningful? Besides, Hongkonger don’t go to China? If you Hongkonger were treated like this in China, what would you think? Think in our shoes.

Zhiquan_Leung: The quality of Mainlander is questionable. However, the attitude of Hongkonger is also problematic. One country two systems spoiled Hongkonger. In these one hundred years (*refer to colonial time), they don’t know that they live like a soulless ghost.

KAM_MI(*a Mainland Cantonese): One character: ugly. Two characters: face-losing. Three characters: no eye see. I don’t support this women this time because I encountered this kind of hysterical woman.

高登會員A: They can’t tell right and wrong. This country is dead, you know?
大俠龍劍飛: (*He quoted that British lapdog line and gave a clown icon which means ridiculous.)

牛奶糖一號: Their master-slave mindset is so deep-rooted. Even when they escaped to Hong Kong, they would say this is the salvation to Hong Kong.

奇趣照片: (*He quoted a weibo comment “I suggest canceling individual visit scheme”) Why can’t they cancel it immediately?  What are they waiting for?