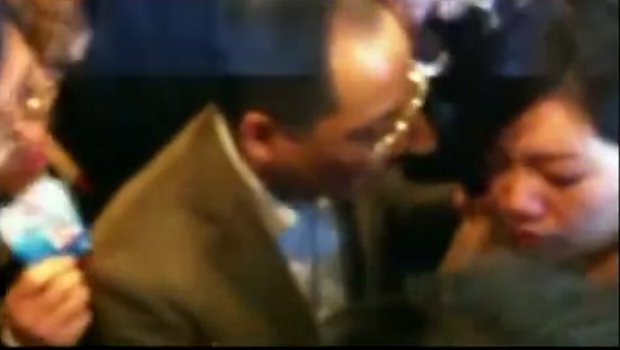 Yesterday, the governor of Guangdong province Zhu Xiaodan mentioned Hong Kong-China conflict bombastically in his press conference. However, inside the venue, a TVB reporter and a Mainland China correspondent from Hong Kong Commercial Daily quarrelled. It again sparks the talk of Hong Kong-China conflict. Lu Hong-chao, the Mainland China correspondent, was said to be “not from Hong Kong” during the question time. After the press conference, Lu questioned Cheng Sze-ting, the TVB reporter, and violence was involved. Cheng asked for Lu’s apology while Lu said Cheng was “pretending”. Some Mainland Chinese reporters accused Cheng of “discriminating Mainland Chinese media”.

Yesterday morning, when the press conference of Zhu Xiaodan was about to end, RTHK reporter Chan Miu-ling said “please give Hong Kong reporters a chance (*to ask question)” and it would be about problems of self-drive tour and “double negative”. However, the host gave the chance to Hong Kong Commercial Daily’s Lu Hong-chao, who sat in the front row, and his question was about Guangdong’s economic transformation.

Some Hong Kong reporters were angry with that and said, “He isn’t from Hong Kong.” and “He is a Mainland China correspondent.” After answering Lu’s question, Zhu picked Chan Miu-ling to question in person. After the press conference, Cheng and Lu were in serious quarrel near the back row, where Cheng’s seat was.

According to the account that Cheng told to those nearby, Lu regarded her as the one who cried out “He isn’t from Hong Kong”, and he walked in front of her, pushed her shoulders and made her stepped back a few steps. Then he pulled her journalist pass on her chest until it came off, and he threw it back to her face. During the course, he could not stop questioning, “Which media do you belong to? Don’t you know the mutual respect between reporters?”

From what our reporters witnessed, when Lu Hong-chao attempted to leave, Cheung Sze-ting, Chan Miu-ling and other Hong Kong reporters surrounded him and requested an apology. Lu even hid in the male washroom for some time and then returned to quarrel. Under the mediation of staffs from the venue, he only said one “sorry”. However, he hold his journalist pass in hand and claimed that he was also a Hong Kong reporter. Cheng Sze-ting rejected his apology and “reenacted” the scene “that’s how you pushed me”. During the course, Cheng was shocked to tears.

At that time, some Mainland Chinese reporters also joined the quarrel and questioned Cheng , “Is it a discrimination against us?” and “We are also reporters.” As more and more people joined in, several Mainland Chinese TV reporters filmed and questioned her simultaneously, and they accused her, “Don’t act!” and “You just discriminate us!” Finally, Cheng Sze-ting was forced to leave and Lu also went away.

According to Wiki (Chinese),

Hong Kong Commercial Daily is the only Hong Kong newspaper that can be sold in Mainland China. However, its circulation in Hong Kong is very low.

After the press conference, Lu Hong-chao mistook Cheng Sze-ting for the one who “spoke against him.” He rushed to her front, insulted her, pushed her shoulders with two hands, pulled off Cheng journalist pass and threw it back to her face. Cheng Sze-ting, who was attacked innocently, reduced to tear. However, Lu Hong-chao humiliated her and accused her of “acting”. He said, “Are you trying to spark hatred between China and Hong Kong?”

反蝗遊擊隊: It is more like the man wants to spark hatred between China and Hong Kong himself.

中交建你老母: Mainlanders always have low self-esteem. Whenever there is problem, they will say they are discriminated. They all look they have suffered all the unjust treatments in the World.

珍妮B我老婆: Strong Country (*Mainland China) people have been self-inflating since 2008. However, they have no substance inside. In the end, they are like balloons. When they are popped, they burst.

有線打手: A TVB reporter was beaten. However, her own station doesn’t report it. (*sad and ridiculous icons)

義神星: Even the “Hong Kong” reporter who asked the question is a fruad.

JiHoon: What a vulgar man! Doesn’t one need to go to school in order to be a reporter? A big man beat a woman. Cheng Sze-ting should sue him for sexual harassment.

Those Mainland Chinese reporters who participated in the quarrel wanted to create chaos. They always say “Are you trying to spark hatred between China and Hong Kong?” In fact, they are the culprits themselves. Whenever they are unhappy, they will say this retard sentence. They are like primary school students. When they lose in a verbal war, they will throw a tantrum. Eat Shit!

vivien810: Now, it seems that the host wanted to censor Hong Kong reporters’ questions. Who discriminate whom? Make it clear please.