Netizens critcise that Hong Kong Baodiao (保釣, defending Diaoyu Islands) activists, despite their pro-democratic stance, have hurt Hong Kong. They believe that this Baodiao action is to shift focus away from Hong Kong internal problems, especially when awareness of defending Hong Kong is growing.

No. 2 in the picture is Tsang Kin-shing 曾健成 aka Ah Ngau, which means “ox” in Cantonese and is a common nickname for men from the grassroots. (Facebook)

Tsang is a member of the League of Social Democrats 社民連, an aggressive pro-democratic political group. The most prominent member of the party is Long Hair, Leung Kwok-hung.

No. 5 in the picture is Yang Kuang 陽匡 (Facebook. He calls himself “Why Yang”.). Yang Kuang was sentenced to jail after leading Guangzhou labour movement in 1989. (Source)

Koo always makes protest props like coffins for Long Hair. (Source) He burned his homemade Chinese flag (*the 5 stars are on the right) in front of LOCPG during the protest for the death of dissident Li Wangyang. 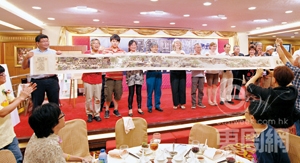 The printing version of “Along the River During the Qingming Festival“, which was donated by the president of the Executive Council, CY Leung, was sold for $33,000 dollars. The evening party raised $1.3M in total. 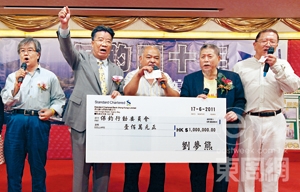 Member of the national committee of CPPCC, Liu Mengxiong (left 2), donated $1M dollars to support Baodiao action. This donation is the largest of the evening party.

Liu Mengxiong, member of the national committee of CPPCC, is a powerful supporter of Hong Kong Baodiao action. In recent years, he has donated more than $3M dollars (about four hundred thousands USD) to Baodiao action. Liu told Yazhou Zhoukan that the ship of Baodiao going into the battle of national sovereignty is the best “national education”.

Member of the national committee of CPPCC, Liu Mengxiong, aka “Dream Bear” (*because of his name 夢熊), also wants to participate in the Hong Kong Island election. However, Beijing does not approve it. He also said that he had a secret deal with the member of the Social League of Democrats “Ah Ngau” Tsang Kin-shing.

“…these Baodiao gropus, in this critical period of Hong Kong, are still giving a hand job to China?”

On the day before yesterday, on the comment page of Apple Daily’s headline “Landing on Diaoyu Islands”, a female reader wrote like that, “I am a Honkonger. I only love Hong Kong. I only concern about the land of Hong Kong. When the land of Hong Kong is about to be robbed (Northeast New Territories Development Plan), when the next generation of Hong Kong is about to be brainwashed…When our Hongkonger identity is not tolerated…I want to question these Baodio groups, in this critical period of Hong Kong, why are they still giving a hand job to China? Shaming Hong Kong? Displaying the flag of fascist power?”

This is not an individual’s view. In comment sections of all the Baodiao news, the similar view is very common. This illustrates that even though Baodiao heroes are very brave, not only is this action unsuitable to the current situation of Hong Kong, but also hurts the vigorously rising social movements.

Under the pressure of “one country”, the awareness of “two systems” has been gaining ground in recent years. As “city-State theory” appears, dragon lion flags were especially eye-catching in July 1st demonstration. Towards Shenzhou 9 and the performance of Chinese Olympic team, Hong Kong citizens lose enthusiasm. In the critical period when Hongkongers are using the awareness of autonomy to against the mighty “one country” pressure, the ship of Baodiao departed. Do you believe that it was a coincidence that Hong Kong government let the Baodio ship pass? Is CY leung more open than the previous Chief Executives? Do you believe that the verbal support of China and action-less hard-line response are signs of changes? Do you think that CY Leung’s swift response towards Baodiao action deserves more points? These are really great misunderstandings.  Under the two big circumstances that the U.S is tightening alliance with Japan and Hong Kong election is around the corner, all these are schemes of the Communist Party and HKSAR government:  Using Chinese nationalism to lower Hongkonger’s autonomy awareness. And Baodiao action appeared under calculations. If this Baodiao action could not let Hong Kong autonomy awareness die down, it would at least cool the awareness down.

More than 20 years ago, during Sino-British talks, I remember that Hongkongers who were against Handover were labelled as “the guilt of nationalism”.

(*This is not a full translation) 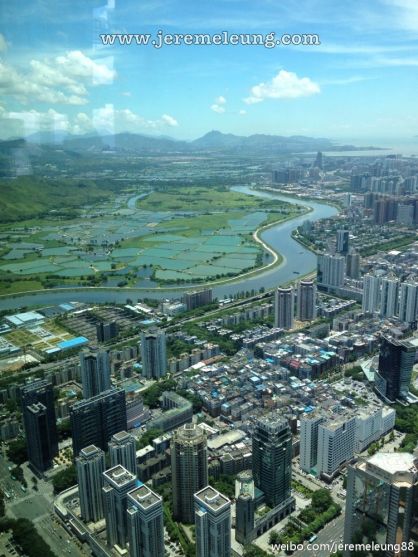 The green side (video) is Hong Kong and about to be ceded to Shenzhen – in the form of visa-free cities in Hong Kong, signifying the complete end of one country two systems.

T: This essay of Li Yi is very good. It’s so straight-forward. These Baodiao activists used the 5-star flag to Baodiao when Chinese human rights are suppressed and Hong Kong autonomy is under threat, stirring up crazy pan-Chinese nationalism. This is extremely stupid.

Chan: This time, the League of Social Democrats may be caught in the trap. Before election (*on Sep 9), the society is filled up with Chinese nationalism. That red flag and invaded territory are all over TV and newspapers, watering down the uselessness of Leung’s cabinet, corruption and lies of high officials and brainwashing education. Voters might vote for patriotic parties easily. This is not healthy for the League of Social Democrats. National heroes may have became a piece in the government’s chest board.

A netizen took photos of newspaper headlines of Hong Kong newspapers inside 7 Eleven on Aug 18.

琴獸: Those pro-democratic pan-Chinese nationalists have abnormal thoughts. They have hurt Hongkongers for a long time. (For them), Chinese problems are big deals. Hong Kong problems are trivial. Basically, Beijing arranged everything, and they released plastic pallets to destroy Hong Kong. Then, using Baodiao to shift focus away from Shenzhen-Hong Kong integration plan.