On 2012.9.3, Hong Kong ATV “ATV Focus” claims that Scholarism, the student group which organises anti-national education protests, is being exploited by the “destruction camp” of Hong Kong, which is claimed to be under the manipulation of London and Washington. Netizens are chilled to the bone after viewing the programme.

(If you can’t read the subtitle, please view in Youtube and choose “interactive transcript”.)

Today, I am ashamed of my ATV origin. ATV, congrats, you have finally became a “focus”!
(*ATV programmes always receive zero audience ratings. ) 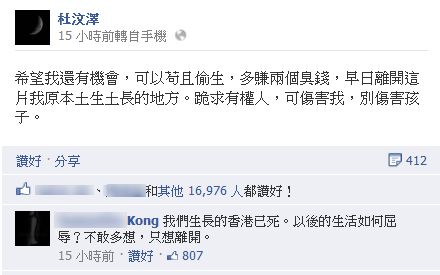 Chapman To: I hope that I still have the chance to live for the sake of living and earn enough dirty money to leave my hometown. I beg those powerful people, you can hurt me but not the children.

Kong: Our Hong Kong is dead. How humiliated our life will become? I dare not to think. I just want to leave.

He has just been asked to shut up via intermediary.

You don’t need to tell me via intermediary! I know! I got it! Your a**!

Wong: What kind of place is Hong Kong about to become? What kind of world is this world?
Basically, they force you to eat shit and even teach you that shit is very delicious! Then, they tell you, “You’ve never eaten shit. Why do you know that it is not delicious?” The end of the world should come faster. I’ve a headache after watching this.

吳: Sigh…It is like rewatching the footage of Liu Shaoqi being publicly criticised and denounced during the Cultural Revolution. Unexpectedly, it appears in the year of 2012 in Hong Kong.

Lam: CCP and local commie really use every shameless mean to blacken the reputation of the opposition camp, and even students with conscience are defamed. ATV brazenly helps the wicked to do evils. This disgusts and angers me!

If one can’t be stained red, then blacken him.

Spokeperson of the office of the Communications Authority said that they have received over 10,000 complaint emails. It is believed that these emails are related to “ATV Focus”. Majority of the complaints include: the content of the programme is biased and false, lacks of objectivity, violates the principle of fairness in election ordinance, misleads the public and suspected to blacken the name of Scholarism. The spokesperson said that they are still counting the number of related complaints and will handle according to normal procedure.

The office of the Communications Authority has received 30,000 emails. It is believed that these emails are related to “ATV Focus”.

The number of complaint email has reached 40,000, according to Sharp Daily.

Former chief editor of Takungpao is the mastermind
According to 2012.9.5 Apple Daily

It is said that the mastermind behind the incident is the former executive chief editor of Takungpao Lui King-bun. He joined ATV in April and is in charge of special topic branch of the news department. This commentary is written by him. Yesterday, the programme still continued to mock that anti-national education movement was an election campaign’s “strategy”, and it even said that hunger-strikers would “have accidents” to gain sympathy. It is said that the programme had been modified and slightly reduced the contents that target Scholarism. In recent months, “ATV focus” have commented on anti-national education movement frequently. It once accused that “even foreign students came forward and attacked” and was criticised by ethnic minority concern group Hong Kong Unison.

Fung Siu-ling is Discontented with Lui King-bun
Lui has even done many petty actions including the plan of transferring Fung from the frontline editorial to special topic reporting. It is said that Fung could not accept the arrangement and resigned on Sep 3th. At that time, the incident of “ATV Focus” had not yet happened. It is said that staffs of the news department have regarded that Lui’s working experience in newspaper doesn’t fit the operation of television. Besides, Lui is from Takungpao, which always publishes critcising and denouncing style essays. Therefore, someone used the excuse of having different views to resign.

A protester took off his pants in front of ATV crew during anti-national education protest.

Other protesters gave ATV a thumbs down.

On 2012.9.8, some reporters from ATV news department dressed in black and made cross sign to give support to the anti-national education movement.