In 2011, Hong Kong Monetary Authority announced that all ATM magnetic strip cards are going to be replaced by chip cards to increase security. As new ATM chip cards are being rolled out, netizens have noticed that the symbol of Visa Plus/Mastercard’s Cirrus is gone and only that of China UnionPay remains. Besides worrying about privacy and security problems of China UnionPay, netizens also see this as a sign that Beijing has absolute control over their bank accounts.

膠人: I am from Macao (and a bank staff). Macao ATM cards are also going to be changed to China UnionPay chip cards. It is really fantastic. If the Communist Party is in trouble, everyone will be forced to be “patriotic”. (f***)

**俠: Point 1, that is to prevent Mainlanders from transferring money to overseas through Hong Kong, is right. Everybody knows that RMB is like hell bank note. If Mainland China is in trouble, Mainlanders will be more hysterical than you. They will all rush to banks demanding foreign currency exchange (like USD). Renmin Bank will not have that f**king amount of USD.

As the news spreads, Mainlanders in overseas will withdraw foreign currencies equivalent to the amounts of their RMB accounts…

….China UnionPay will certainly not be able to withdraw money as China will definitely shut down UnionPay. 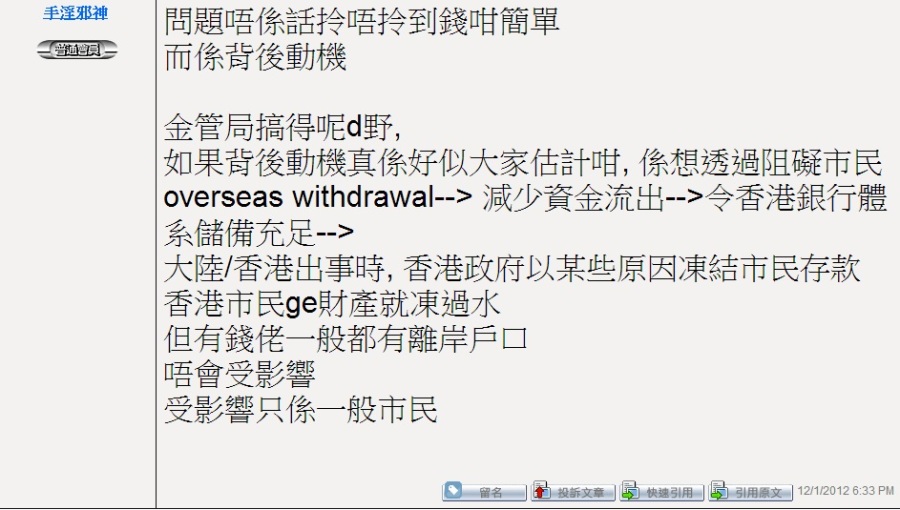 **邪神: If the intention were what you guys estimated – through obstructing overseas withdrawal and reducing the outflow of money, when Mainland China/Hong Kong were in trouble, Monetary Authority could make Hong Kong bank reserve sufficient. Then, Hong Kong government could freeze citizens’ accounts – Hong Kong people’s assets would be in danger. However, rich people generally have offshore accounts, they would not be affected. Only general people would.

*你正呀喂: Seriously, HK people have to transfer money outside of HK or buy gold to keep the assets. HK always say “deposit protection”, which may be just an ad asking you to keep your asset in HK for China to take out anytime.