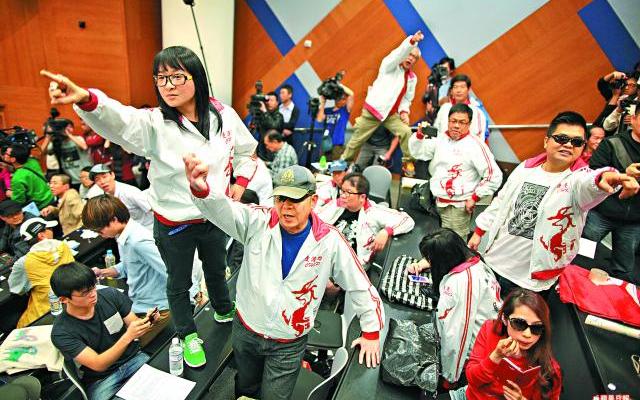 Today, a symposium on “Occupy Central” is being hold at the City University. The line-up of guests is “star-studded”: left wing Leung Kwok-hung, autonomist Chin Wan, and Taiwan DPP’s Lin Chia-lung. Of course, the symbolic figure of “Occupy Central”, Professor Benny Tai, is also included. However, the strangest thing is that the modern Red Guard, Patrick Ko of “Voice of Loving Hong Kong”,  is also invited. The proposal of “Occupy Central” has been presented for some time. Yet, there is still discord within the public. Originally, the proposer, activists’ representatives, and autonomists who are sceptical of “Occupy Central , could have had a debate over the whole campaign and challenged each other’s thoughts. It could have been a good opportunity to settle differences. Unfortunately, the symposium is being disturbed by CCP fanatics and uncles of Victoria Park. When I started to write this article, the symposium hadn’t been ended. But I have no doubt that it will be ended with a farce.

In the name of “love China love Hong Kong”, these red organisations which have “love” in their titles attack pan-democrats personally, carry out verbal abuse, and stage Cultural Revolution era’s “the masses v. the masses”: they frequently launch pro-government protests to “shape public opinion”. Every time, they made a fool of themselves…. They should be called “Voice of Eunuchs”. Even though many of them are paid and have no personal judgement whatsoever, some of them really believe in harmony and stability, obey the government, and genuinely hate politicians and the media that are “creating chaos in the society” in their eyes. Japanese scholar Kato Yoshikazu wrote a book called “Patriotic Thieves”, in which he talks about this kind of people.

From their tone and speech, we can see that the ideology of these patriotic thieves has 3 major components: First, extreme patriotism/nationalism. Their mind is full of Opium Wars and Japanese invasions. They always imagine that the West still wants to destroy China by arranging a large number of Chinese traitors, and they blindly believe that the interests of the country are higher than that of individuals, holding collectivism high; Second, utilitarianism and money worshiping. These two bring out the most sordid side of the Chinese culture. “Making a livelihood” is the most important. The only rights they know are the rights to eat and be full. Their thinking is still stuck at Yin Haiguang’s four bio-philosophical levels. Therefore, they firmly believe that stability is more important than democracy and freedom; Third, obedience to authority and leaders. I don’t know if it is due to genes, culture or whatever reasons, there is a kind of people that love obeying authority: whether they are in schools, companies, or the society, they will follow the most powerful no matter what. What they are basically following isn’t the CCP or Leung Chun-ying but the power these leaders are holding.

Stepping into the era of thuggish politics

If you understand the psychology of the Red Guards, you will know that they are very difficult to handle. They are irrational and don’t believe in universal values. In their eyes, there are only power and money. Therefore, it is fruitless to debate with them. They are certainly mobilised by the Liaison Office. Mobilising people to support the government and attacking the Opposition can only be seen in dictatorial countries like North Korea, Russia, and Iran. Therefore, Hong Kong has stepped into the era of thuggish politics. The situation is worrying. Staging “the masses v. the masses” was the trump card of Mao Zhedong: fighting against landlords, capitalists, the educated, Liu Shaoqi, all were made use of the hands of the people.

Certainly, Cultural Revolution style struggle sessions have yet appeared in Hong Kong. However, the appearance of the red organisations is basically a smear of the anti-government power. The regime doesn’t afraid that people regard the organisations as ridiculous. They only need to make the public think that “both sides don’t deserve support.” By making the whole campaign very chaotic and violent, they scare the centrists in the society. It is certain that Red Guards will make trouble in “Occupy Central”, making the public think that it is a violent farce. Those who are planning the campaign need to prepare for the worst. And participants also need to keep calm. Green porcelain doesn’t need to fight with a damaged one. You can give loud laugh and clap when they insult you. However, if you argue with them, then you will fall into their trap.

Cuson Lo‘s comic mocks that members of Caring Hong Kong Power are just lapdogs of Leung Chun-ying, who has a wolf tail. 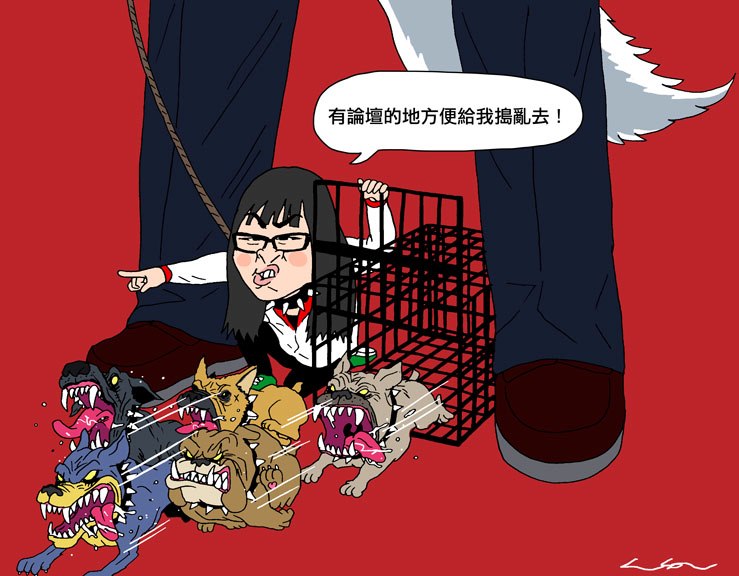 2 thoughts on “The Conspiracy Behind Suicidal Pro-China Organisations”