In July, I was invited to have a talk on land supply organised by a think-tank. During the exchange session, someone mentioned that over 70% of lands in Hong Kong belongs to country parks. As the land supply is tight and many people need homes, are all country parks really untouchable and not for development?

Chan later corrected that only 40% of Hong Kong lands are country parks after he was chastised for giving the misleading figure. (Screen capture before the correction)

On Sep 10th, Lam Chiu-ying chastised Paul Chan on CRHK’s “Set Out On a Sunny Day”.

0:33
According to my understanding, country parks take up 40% of Hong Kong land.
4:14
Using lands of country parks for other purposes… I think the idea shouldn’t be put into consideration. From the beginning, I call the idea “a cancerous cell of thought”. If you give away one inch, later, they’ll demand 1 foot. Sooner or later, they’ll demand 10 feet. It’ll soon become an unstoppable invasion.
21:56
Water channelling areas were assigned to become country parks. You don’t want to build houses in the areas to contaminate reservoirs.
29:13
Listener: I agree with Mr Lam that country parks are untouchable lands. Think deeply, Hong Kong government has no population policy at all.
30:13:
Lam: Well said. The core of the housing problem is Hong Kong’s population policy. In the end, how many people will Hong Kong design to have? Hong Kong has a carrying capacity…. 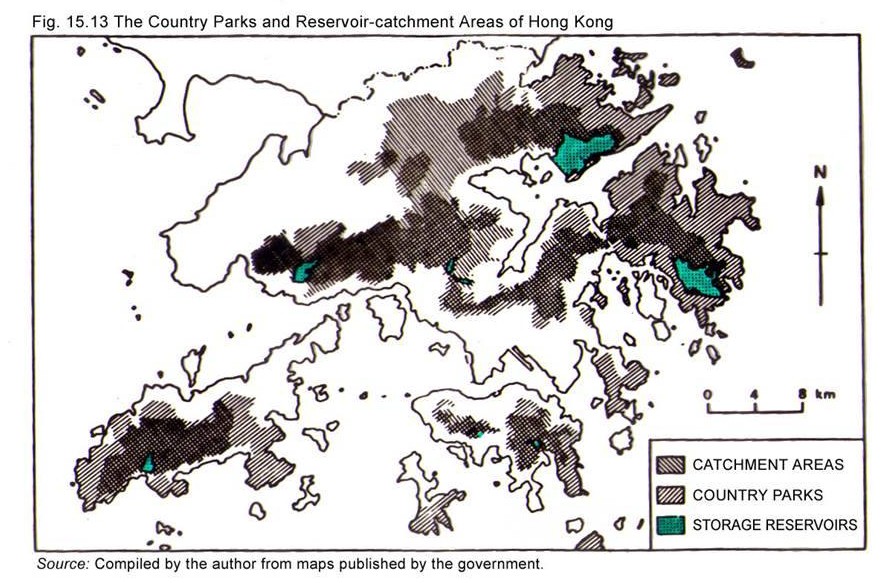 唯有杜康: Simply said, besides providing recreational places for the public, Hong Kong country parks ensure the safety of water supply. The picture above shows that the locations of country parks and reservoirs overlap with each other. Once country parks are developed to become residential buildings, population will pollute the water supply of Hong Kong

異: Northern Chinese have planned how to destroy Hong Kong.

小魔子: If China still sends colonists without limits, not only is developing country parks not enough, Victoria Harbour also has to be reclaimed. (f***)

In 2011, the 12th 5-year plan for Guangdong province, “Action plan for Bay Area and Peal River Estuary”, which includes Hong Kong for the first time, surfaced. The plan, which proposes the integration of Hong Kong into Guangdong province, only had the consultation period of 18 working days. As Hong Kong activists protested against the plan violating one country two systems inside the Planning Department, they found a large map titled “Major Transport Network of Shenzhen” and it includes all parts of Hong Kong.

One of the missions of the plan is to connect Hong Kong country parks with China’s road via Greenway (綠道).

Excerpt about Greenway via Inmediahk

“Green Net” includes the constructions of “recreational zone” and “cross-border greenway”. The plan above shows that the constructions involve five country parks including Sai Kung West, Tai Mo Shan, Tai Lam and Pak Shin Len. It suggests connecting Hong Kong country parks with Greenway which Pearl Delta is constructing, forming a cross-border Greenway network. It also shows that Mei Po Wetland Park will be connected to Shenzhen. This raises a question – if “cross-border greenway” is built, does it mean that there is no need of having a border?

Nothing Green about Greenway

Hongkongers who concerned about the plan even found that Greenway is built by removing original plants and then laying bricks. The function of maintaining ecological resources is doubtful.

According to the standard of Greenway in Guangdong province, the maximum width of Greenway can reach 200m, which can park two A380 airplanes. It raises the doubt that if Greenway could be used as runway and have military purposes. Also, the country side of New Territories can’t accommodate 200m-wide road.

Greenway allows traffic. In the end, it is an infrastructure project. Convenient locations can boost housing prices….

The plan is very meticulous. However, Hong Kong is an advanced area which is developed progressively. China is a backward area that is developed at an abnormally racing speed. The plan is like the American or British governments have to redesign London and New York. It’s unbelievable.

The plan destroys the green belt of Hong Kong, which will be connected to China’s road systems. using Chinese way to redesign Hong Kong. Also, it will destroy the dual sector model of Hong Kong: affordable housing in the countryside, farming communities, old housing in urban area, old quarters, public housing and its shopping centres, cheap industrial building which can be used as warehouses or open workshops and small businesses. In recent five years, these have been disappearing — re-modification of industrial buildings, compulsory acquisition, the hoarding of lands by developers, the construction of luxurious housing in the countryside after evicting farmers… Hong Kong will become a place that only allows wealthy people to reside; She will be completely gentrified.

The plan is like a surgery — piercing the protection belt, letting blood, destroying the character of Hong Kong city-state, then implanting foreign cancer cells, bacteria or virus, occupying the host, making Hong Kong become an ordinary commercial district under Guangdong province. And the future population is mostly rich Chinese. Poor local Hongkongers have to migrate to China. Under such scheme, Hong Kong will be completely urbanised and gentrified, destroying Hong Kong’s identity and mutual value. In the end, Hong Kong democracy will have nothing to base on. Democracy camp will be naturally dissolved.

The following video is a government advertisement for country parks in 1983.

The theme song of country parks’ advertisements is “I love nature”.

Under the green shade, laying on the grassy slope , (country parks) allow me to stretch my chest.
(Country parks) throw away my tired heart, let me walk into the nature.
Under the shinning sun, I look at kites turning slowly.
The nature is beautiful. I wish that it wouldn’t be polluted.
Let young plants grow. I wish that flowers and grass wouldn’t be destroyed.
I wish that fire would quickly be put down. Make everywhere in the parks green.
Deep inside the beautiful forest, the singing of bird turns slowly.
Plant between mountains and water. Wish the freshness wouldn’t be changed.

Look at beautiful trees and flowers in here.
I love country parks.
The beauty is elegant fun of the nature.
I hope the beauty would stay forever.

One thought on “Country Parks – The Lifeline for Hong Kong”