Recently, websites for viral content worldwide and China news have started to share a set of comic strips titled “16 Differences Between Living In Hong Kong And Taiwan” by Jie Jie. However, since their source is from China’s Weibo, Jie Jie’s comic strips portraying Hong Kong’s social problems are not shown. Therefore, the remaining comic strips and Jie Jie’s elaborations are introduced in this post.

(The abbreviation of Hong Kong, 港, rhymes with 講 “to talk”.)

The protagonist of this issue’s “Wero” is Jie Jie, who came to work in Hong Kong from Taiwan alone, learnt pure Cantonese from his friends (including obscenities); learnt Hongkonger’s helplessness of “having no choice” from TV; learnt our resentment at the government and society through Hongkonger’s acts.

In September this year, he started the Facebook page “Jie Jie Talks Nonstop“, using humourous techniques to express his thoughts on Hong Kong. He uses his pens to draw out absurdities of the Hong Kong society and cultural differences between Taiwan and Hong Kong. At the end of October, the number of his fans jumped from 2000 to 57,000.

Jie Jie said, Hongkongers are very reversed. When facing unfair, infuriating, and ridiculous things, Hongkongers only silently endure them. “We Taiwanese are more straightforward. I’ve come to Hong Kong for more than 2 years and seen many unfair things. Therefore, I express them with my drawings.”

To Jie Jie, who is from a middle-class family, the first impression of Hong Kong is “unsuitable for humans”. “Hong Kong is very crowded and has many people. Buildings are so dense. Flats are extremely small. A family of four has to cram in 200-square-foot home. How to live? In his early days in Hong Kong, he once asked to visit a local friend’s home. However, his friend said his home is too small to receive guests. I didn’t believe it, so I visited him without asking his approval. Then I found out that my friend really tells the truth.

Some of Jie Jie’s Works

Jie Jie: “Chanting Hong Kong with magical colours” my ass!
Dear tourists…
What you should really thank is Hongkongers who are working overtime.
Thanks for all your hard work!

Jie Jie: Previously, I watched a news interview…. I exploded with rage.

Your (Chinese tourists’) purchases of famous brands and gold jewellery aren’t helping Hong Kong tangibly. Don’t talk like as if you were a saviour, all right?

Norelle: Jie Jie can understand us Hongkonger! Thanks for expressing you thoughts! If Hongkonger say these things, Chinese will only say we discriminate and are intolerant of them! Holy crap

Chan: Anyway, most of the money goes to pockets of the rich. Normal people in Hong Kong suffer the consequences of rising rents, decline in living environment, and resource plunder etc. Taiwanese friends, if you don’t want to follow the footstep of Hong Kong, please don’t sign any cooperation agreements with China.

Choi: I live in Sheung Shui. I always joke that we will evolve abilities of eating gold jewellery and drinking shampoo.

Vincci: I live in Causeway Bay. When I was a child, everywhere sold affordable stuffs. Now? Lucky House Restaurant became GOD, which is then replaced by SASA. Percival Street used to have shops of all varieties. Now? Shops either sell designer bags or become SASA, Chow Tai Fook or fucking pharmacies! Even Nam Kee (a local noodle restaurant chain)  is going to close down. I’m so f**king angry! 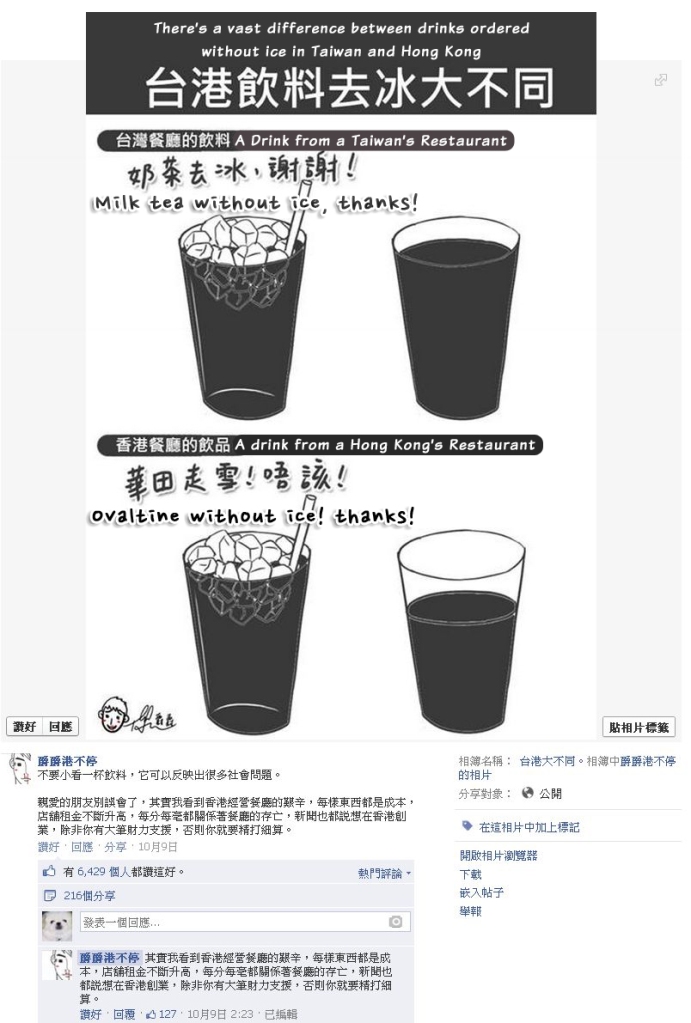 Jie Jie: Don’t underestimate a cup of drink. It can reflect many social problems.

My dear friends, please don’t mistake my meaning. In fact, I can see the hardships of running a restaurant in Hong Kong. Everything is a cost. Shop rents rise continuously. Every cent is related to the survival of a restaurant. News even says if one wants to open a business in Hong Kong, one has to budget meticulously unless being backed up by strong financial support

It can’t be helped. In Hong Kong, if we don’t shoot videos (of quarrels), then we will be criticised for not tolerating (Chinese) tourists. Then Chinese netizens will say how Hongkongers disrespect Chinese. Only videos can shut people up.

Nelson: Reason: Taiwan is an independent country. Hong Kong is a colony bullied by everyone.

Whatever you can think of, you have to wait in line.
Hongkongers, thanks for all your hard work!

2 thoughts on “Taiwanese Draws Out Absurdities of Hong Kong”