On the evening of Nov 5, Lam Sing-tong, aka “Ah Lung”, a 32-year-old sanitation worker who joined the occupation because of CY Leung’s speech denying the poor from real democracy, was hit in the tailbone by the police inside Mongkok’s occupation site. Ever since then, he has lost all feeling in his right leg. He was admitted to Kwong Wah Hospital, which constantly asks Lam to leave and blames Lam’s disability on hereditary disease. 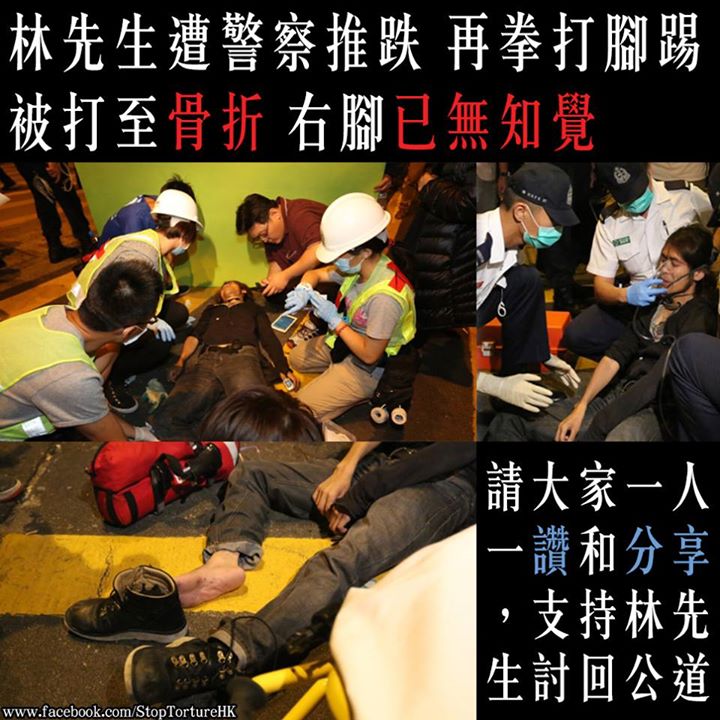 According to  Local Press on Nov 13,

Pastor Timothy Lam on the condition of “Ah Lung”

This morning (Nov 12), a nurse told Lam Sing-tong, aka Ah Lung, that Wong Koon-hung is no longer his attending doctor and a female doctor would replace him. However, it was a male doctor who visited Lam instead. The male doctor also discussed the issue of hospital discharge with Lam.

Lam Sing-tong reaffirms and requests that:

1. He was admitted to the hospital as he was seriously injured after having been beaten by seven police officers for no reason. He has developed a great fear of the police. Therefore, he hopes that the police don’t disturb him during his hospital stay. For example, the police arranged a suspect to sleep in his ward two days ago so that there are two police officers guarding his ward’s door. Yesterday, another police officer asked his name, traumatizing him.

2. Ever since he was admitted to the hospital, he has never gotten proper medical treatment. Yesterday, Doctor Wong Koon-hung claimed that Lam’s case didn’t belong to the department of orthopedic and Lam only suffered from pinched nerve, which is a hereditary disease. Lam reaffirms that he was admitted to the hospital as he was seriously injured after having been beaten by seven police officers. Besides, his family members have never suffered from the medical condition. He hopes that the hospital stops using “hereditary disease” to whitewash police brutality. Lam said that as his case doesn’t belong to the department of orthopedic, then he should be discharged from the department’s ward and given other suitable medical treatments.

3. The hospital took away Lam’s medical record from his bed yesterday and his original attending doctor left. However, the hospital has yet told Lam his new attending doctor’s name and always tells him to leave. All these are distressing him greatly. He hopes that the hospital would still keep the spirit of caring the mankind and not be affected by politics, doing their best to treat their patients and not to turn away patients who are political dissidents.