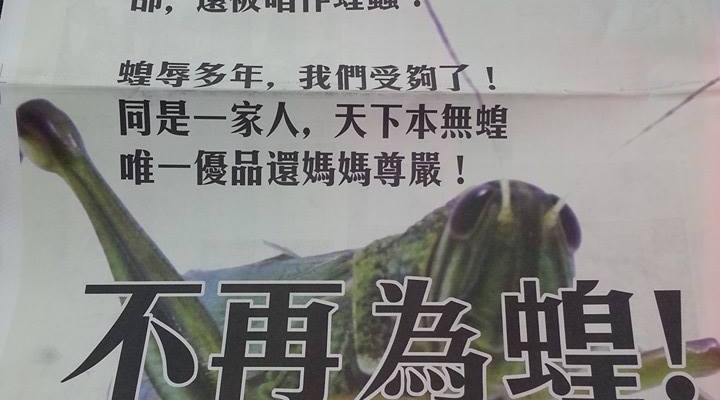 On Oct 30 2014, an ant anti-locust ad appeared on the front page of Hong Kong Daily News. The ad was placed by a Mainland Chinese company that sells maternal and infant care products from the West and Japan.

YOU, have had enough!

I, also have had enough!

for the sake of the next generation, we were willing to put up with the humiliation.

But, I don’t understand,

it’s obvious that we’ve contributed to the Hong Kong economy.

We’ve had enough of the locust humiliation.

We’re one family. There were initially no locusts in the world.

VE YOUPIN gives you back the dignity of a mother!

BE A LOCUST NO MORE!

禾係膠達: It turns out that hoarding up other people’s daily necessities can be called “contributions to the economy”.

Zoe: We’re the ones who have had enough…. They don’t have guts to oppose counterfeit stuffs in China. Yet, they are so opinionated about Hong Kong.

Comment 1:  We should change the ad by replacing infant formulas and diapers with Dongjiang water. Then we can retaliate by placing the new ad in a newspaper.

They buy our daily necessities, use our medical and education resources = Had we motherland compatriots not spent money in Hong Kong, you guys would have doomed. You should just be thankful….

They force us to pay sky-high prices for shitty Dongjiang water = Had the motherland not provided you with drinking water, you would have doomed. You should just be thankful….

Kevin: They’re so powerful. They can turn a false reasoning into a principle and claim the moral high ground. China totally deserves the name “Strong Country“.

Chan: Many people in the North District really have had enough of Mainland Chinese! Including me! Ever since I gave birth to my first son in 2007, I’ve had to compete with Mainland Chinese for maternal-infant health center, maternal-infant services provided by the hospital, infant formulas, diapers, kindergarten’s place, and now primary school’s place… I don’t know for how much more longer must I compete with the locusts! My second child also met the same fate! It’s so tiring to be parents of the Northern District! I’m in despair! Our government has neither dealt with the issue nor assisted us! It only tells us to tolerate Mainland Chinese! Awesome, now the f**king jerks think that they’re VIPs because of all the tolerances! I don’t really want to talk about the issue anymore because I’m about to have brain hemorrhage!

Samantha: It seems that the last sentence is irrelevant to the rest of the poem. For the sake of infant formulas and diapers? Then you should f*** your own government, ask them to reduce the tariffs on these products and to reveal all the dishonest manufacturers. It’s you who have to look to others for help. Stop pretending that you’re contributing to the economy. Go away, moneybags wannabes.

Jason: It’s useless to buy an ad in Hong Kong. They should just buy an ad in People’s Daily and tell the Mainland Chinese government to open up the market. Then they won’t be called locusts! Besides, they fully understand that whether they are locusts or not. If they accept the criticism themselves, then it isn’t Hongkongers’ business.

Every province and every city in China has policies to protect the local people. Why don’t they complain against it? Hong Kong is an extremely small place being gang raped by the whole population of China and is now being condemned by a Mainland Chinese newspaper ad. It’s really ridiculous!!!!