From The Notebook of the CCP’s Colonization of Hong Kong

Szeto Wah, the key figure of United Democrats of Hong Kong and Democratic Party, established Hong Kong Professional Teachers’ Union (HKPTU) and Hong Kong Alliance in Support of Patriotic Democratic Movements in China (HKASPDMC), and he disguised as a freedom fighter all along, deceiving millions of Hongkongers for over 20 years. Not until his death did he admit his close ties with the Chinese Communist Party (CCP) in his autobiography. His younger brother Szeto Keung was vice-director of foreign affairs for Xinhua News Agency.

Not a CCP Member, But More Useful Than One
From Hong Kong 3.0 “Yangtze River Flows Eastwards – the Psychology Journey of a Hong Kong Traitor”

Some people had died; but they still live. The sentence is originally used to praise revered martyrs and failures; however, sometimes the legacies left by these people are like gangrene, placing heavy burden and inflicting unbearable pain on the successors. Szeto Wah is exactly this type of people.

He founded the “Holy Trinity”, which is the union of Hong Kong Alliance in Support of Patriotic Democratic Movements in China, Democratic Party and Hong Kong Professional Teachers’ Union; and he established the pan-democratic camp that put “Democratic Handover” and pan-Chinese nationalism at the top of its agenda, obstructing local politics in the end. Szeto Wah loved the country at the cost of Hongkongers, leaving them powerless when facing Chinese colonialism. All of these are clearly written inside his autobiography – Yangtze River Flows Eastwards. (The title is taken from a renowned poem lamenting that prominent figures all submerged in the torrent of history.)

At the beginning of the book, Szeto Wah doesn’t avoid mentioning that he had close ties with the CCP and even wanted to be a CCP member. At the age of 16, he started getting in touch with the CCP camp. Later, he joined the predecessor of the Communist Youth League, which is “New Democratic Youth League”, and established Hok Yau Club. Even though he was forced to leave the club after a power struggle and couldn’t become a CCP member because of the Cultural Revolution, he still couldn’t forget the CCP and the glorious China he fantasized.

During Sino-British talks, Szeto Wah pushed “Democratic Handover” hard and suppressed the voice of Hongkongers, which was to keep the status quo. What is even more blatant is that, when the then vice-chief editor of Xinhua News Agency, Lin Feng, invited Szeto to have a talk about joining the CCP, even though he rejected, he said, “Some people had ties with CCP-related organization in the past. Now, they had quit. It is even more convenient for them.” The speech means, I, Szeto Wah won’t join the CCP, but I can do more for the CCP. 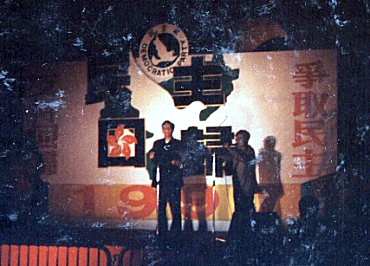 Szeto Wah, the key figure of the “Democratic Handover” camp, explained one of his reasons for supporting the Handover, “For more than a century, Hong Kong is a colony. Therefore, she is kept away from many disasters originated from China. However, I feel guilty that I can’t suffer with my compatriots in the motherland. Now, the Handover allows Hong Kong to be returned to the dictatorial regime, gives me a chance to fight for a democratic China with the compatriots in the motherland, and let me feel what they feel. Therefore, I support the Handover.”

Reading Szeto Wah’s sadistic psychology chills me to the bone. Hong Kong was far away from Chinese disasters because of circumstances beyond our control. Yet, in the eyes of Szeto Wah, it was the fault of Hongkongers. I always say that in pan-democrats’ hearts, they think that being Hongkongers is the original sin against the Chinese race. Therefore, the logic of supporting the Handover is very simple: Drag Hongkongers into the hell of China, then Hongkongers will be forced to fight for a “democratic China” with the Chinese. The whole process is exactly what the Chinese nationalist thirst for: Hong Kong was nailed to the cross; the previous generation of Hongkongers bled; the next generation of Hongkongers bled as well. You don’t wanna bleed? No way! The nail of the CCP has pierced into the flesh and bone of Hong Kong, which is now bleeding to death. Meanwhile, “Democratic Handover” camp gloats – it’s the debt you paid.

“I can’t help mentioning the anti-Daya Bay nuclear plant’s effort 26 years ago (1986) . At that time, the request of “Anti-Nuclear Joint Committee” was very simply – “immediately stop the building of the nuclear plant”. The group gathered over 1.5 million signatures in a very short time, and originally planned to hold a protest at the Victoria Park in November, before the nuclear plant signed the building contract. However, at that critical moment, Szeto Wah and politicians of his camp betrayed the protest – in a conference of “Anti-Nuclear Joint Committee”, HKPTU representative Cheung Man-kwong threatened that HKPUT would quit the committee if the mass protest plan were held. At the end, the protest plan was vetoed. “Today, Hongkongers are forced to live with nuclear plants.

In “Two Contentious Cases“, So Kang-tzit wrote about how Szeto Wah cancelled two important protests in 1989, which could have changed the fate of Hong Kong.

Today, Chan Man-hung (former World Bank adviser) is very pro-Beijing; however, in a HKASPDMC’s meeting 25 years ago, he proposed that the organization should call on a “bank run” on PRC-owned banks to hurt the Chinese economy, forcing Li Peng to step down. Meanwhile, Cheung Ng-sheong, now lives in China and claims that the CCP gave him a warm reception, objected Chan’s proposal as an economist, and said the proposal would hurt Hong Kong’s economy.

In the end, the proposal was vetoed. On the day of Tiananmen Massacre, Chan expressed the same opinion. Later, Szeto Wah and Martin Lee accepted Hong Kong government’s invitation to call on the public not to respond to Chan’s “bank run” pledge thru the radio, so that the people of Hong Kong and China wouldn’t be hurt (financially).

On June 7th, 1989, HKASPDMC originally planned workers’ strike, students’ strike and a demonstration. It was anticipated that many people would join the events. However, at the midnight of June 6th, riots broke out at Yaumatei and Mongkok. Many PRC-owned shops and banks were looted. The police arrested 15 people.

At around 3 to 4 am, Lydia Dunn called Szeto Wah, “On June 5th, 7 to 8 suspicious strong-built men entered Hong Kong with two-way permit; therefore, the police followed after them and found that they barely step out of the hotel. At the riot, they were found leading other rioters throwing stones to the police, attacking PRC-owned companies, setting cars on fire etc. Dunn claimed that the police entrust her to advise Szeto Wah not to hold the demonstration, because the men were not arrested and might lead to other bigger damages. Szeto accepted Dunn’s advice

Compared with the “bank run” suggestion, the incident is very mysterious. It was just two to three days after the Tiananmen Massacre, the power of Beijing wasn’t very stable, and so as Xinhua News Agency and pro-Beijing camp. Did they have any remaining energy to plot a plan to destroy the demonstration?

The 15 people that were arrested disappeared from the public and never charged with any crimes. No one knows if they were really from Shenzhen. If they weren’t, who were they?

Political commentator Lai Chak-fun, member of Meeting Point (匯點), which is the one of the predecessors of today’s Democratic Party, publicly repented for his support of “Democratic Handover” in recent years. In an interview with Mingpao Weekly in 2011, he criticized Szeto Wah for cancelling the “three strikes”, which would have been the golden opportunity for Hong Kong to oppose the Handover. (Three strikes = Workers’ strikes + Merchants’ strike + Student’s strike) 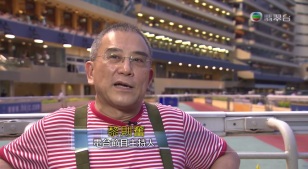 Revolution is like that; it is ininitiated by the public: before there was HKASPDMC, an average joe, like a fit-out worker or a taxI driver, were able to convene thousands of people. If HKADPMC could treat individuals as members, it might successfully request direct election, because there were half a million people joined the organization. However, when HKADPMC formed, it was like the Communist Party, treating organizations as members and controlling every level.

Basically, there were no leaders. Everyone did what he or she could. At that day, Szeto Wah and his people claimed that they founded (Hong Kong People in Support of Beijing Students’ Patriotic Democratic Movement United Committee). Shoot first and ask question later is Szeto Wah’s style, which is a flagrant disregard of a democracy process.

For example, on June 7th, Szeto cancelled “three strikes” based on the advice of the British Hong Kong government. On that day, Lai went to HKPTU as usual and argued with Szeto. “I criticized that Szeto Wah has no political ethics, no political courage, and no political intelligence…”

Lai Chak-fun said, the HKADPMC we know was established after the Tiananmen Massacre, and the protest started by the group ended at June 7th. Before that, the public organized protests themselves. HKADPMC was an unnecessary…

From HKPTU’s own site (now deleted) 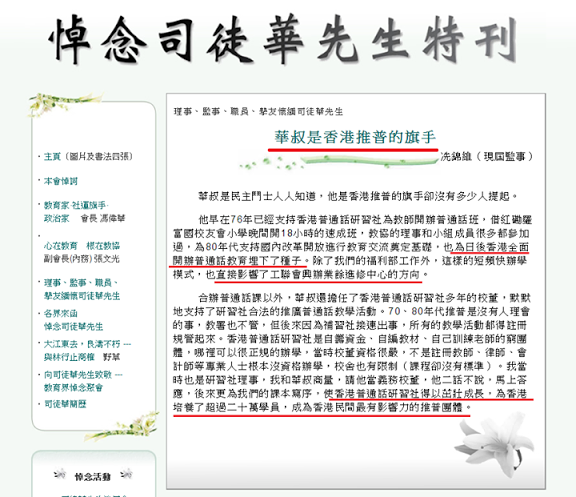 Uncle Wah was the legendary democracy fighter; however, not many people mention that he was the standard-bearer of Mandarin promotion in Hong Kong.

As early as 1976, he had supported Xianggang Putonghua Yanxishe by offering Mandarin classes to teachers. Many HKPTU’s directors and subcommitte members had joined the 18-hour crash course in Mandarin, inside the borrowed classroom of Hung Hum NCE Past Student’ Association School, setting up the foundation for educationl exchanges which assisted the open door policy in the 80’s, and planting the seed for the future all-Mandarin education in Hong Kong…

Besides offering Mandarin classes, Uncle Wah had been the board of Director for Xiangang Putonghua Yanxishe for many years… At that time, I was a director for Yanxishe . I invited him to be the volunteer Board of Director and he immediately accepted it. Later, he even wrote the preface for Yanxishe’s textbook. Uncle Wah led Xianggang Putonghua Yanxishe to grow robustly and trained 200,000 members, making us to be the most influential Mandarin promotion organization.

In July 2012, a former student from Xianggang Putonghua Yanxishe Primary School of Science and Creativity confessed that she had joined the National’s Little Vanguard (國民小先鋒).

In 2012, a netizen compared National’s Little Vanguard to national education of China and the Axis of Evil during pre-WW2 era.